Fueling Up in Stopover Country

Think about your last road trip. Do you remember how many miles you traveled? How often you stopped to eat? Where you spent the night? Were you able to get a good night’s rest or were there disturbances? Was it easy to find fuel when you needed it?

These are all concerns for the many birds that travel long distances to get from their wintering grounds in Central and South America to their nesting grounds in North America and Canada.

Called neo-tropical migrants, many of these birds fly at night and spend the days feeding furiously to gain the calories that will spur them onto their final destinations.

Along the way, over thousands of miles, something called “stopover habitat” is of critical importance. These areas provide much needed resting and roosting areas as well as food, water and cover from many predators. Current research tells us that most winged migrants take multi-day breaks only three or four times during their migrations, which can be thousands of miles one way!

One such bird is the Common Nighthawk (Chordeiles minor), which winters in Brazil and Argentina, and spends summers nesting and raising young throughout North America and Canada.

While not related to hawks, the Common Nighthawk gets its name from their feeding behavior of “hawking” (i.e., catch in mid-air) insects like moths and beetles.

Nighthawks are crepuscular creatures, which means they are out hunting at dawn and dusk.

Nighthawks are streamlined and slender birds with a dark body and a contrasting white blaze near the wrist or bend in the wing. You will likely hear a distinctive buzzy peent sound as they swoop and dive in graceful loops chasing their prey. Their tiny beaks open to reveal a cavernous mouth well suited to snapping up flying insects. They can be seen over streetlights, stadiums, and other bright lights as well as ponds, lakes and open natural areas. They forage near the ground or water, or more than 500 feet into the sky.

These birds and others in the Caprimulgidae family are also known as nightjars. Most have small feet, long pointed wings and cryptically colored plumage that resembles bark or leaves. This last adaptation is what makes conservation of these species so challenging. They are extremely hard to locate and identify. 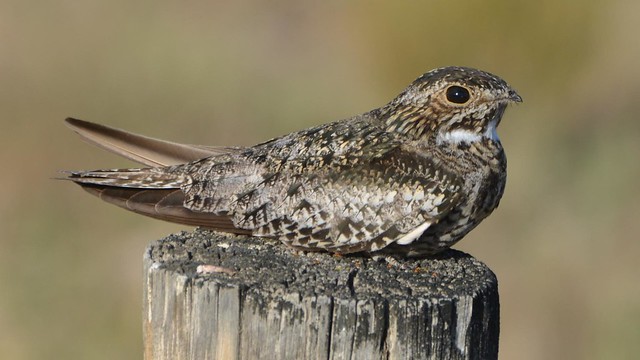 Common Nighthawks face a multitude of challenges in their life cycle. These include reduction of mosquitos and other aerial insects due to pesticide spraying, nesting habitat loss including open woods in rural areas and flat gravel roofs in urban areas, car hits as they forage over roads or nest in the gravel road shoulders, and loss of stopover habitat as they make one of the longest migrations of any North American bird.

The Common Nighthawk and other neo-tropical migrants need your help!

Here is what you can do:

Members: Join us on the third Tuesday of each month for a Sunset Prairies Hike at Stagecoach Prairies. Park in the lot off 11th Street South. Our next hike is July 11 from 7:30 p.m. to 9:00 p.m.