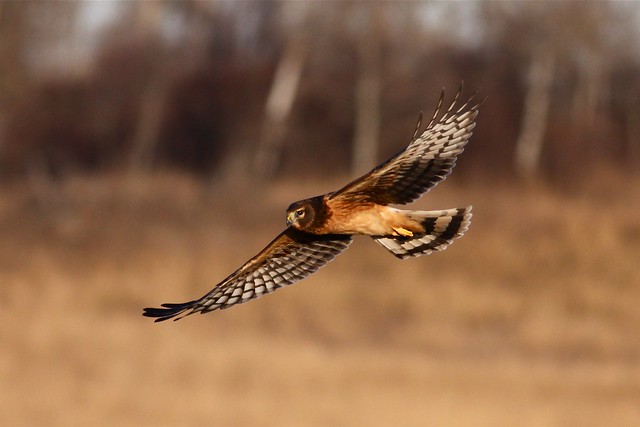 A slender, elegant bird, long of wing, glides magically across wetlands, prairies and meadows. It flies with a light and airy grace, moving low over the vegetation as it hunts its prey. The Northern Harrier is poetry in motion.

As a member of the raptor family, the Northern Harrier (Circus cyaneus) has the typical hooked beak and long talons. What helps to identify this bird are its long wings and tail, and a distinctive white rump patch, which occurs on both male and female.

They, like Turkey Vultures, hold their wings in a dihedral, or V shape, when flying. Their flight pattern when hunting is a floating dip and rise, side-to-side motion that is mesmerizing to watch.

The food of the Northern Harrier during mating and nesting season consists of insects, small rodents, small reptiles and smaller birds. In the winter they feed almost exclusively on meadow voles. Its owl-like face and large ears help it to hear prey moving on the ground. When it finds a tasty treat, it drops from the sky and pounces on the unsuspecting victim. Northern Harriers eat right where they are and, when completely satiated, will fly to a nearby post or perch where they sit until digestion is complete.

These birds are ground nesters. Typically found in a dense clump of vegetation, the nest platform is made from cattail, alder and willow. The inside of the nest is lined with rushes, grasses and sedges. It takes roughly one to two weeks to complete. The male and female both help to bring in materials; however, the female arranges everything to form the nest. 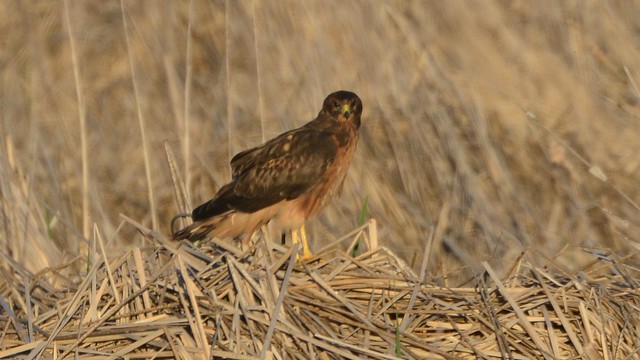 The female lays four or five eggs, which incubate for about a month. After hatching, the nestlings remain in the nest for only two weeks. For all birds, the nest is a dangerous place to be so the sooner they are out, the better! 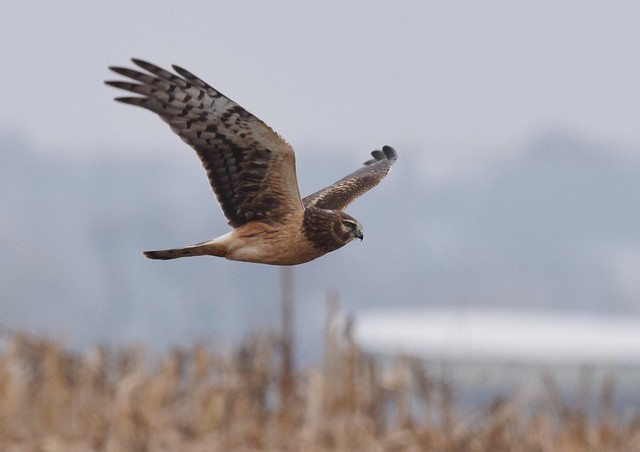 Northern Harriers can be found throughout North America. As a long-distance migrant they usually travel alone, in the daytime, hunting as they go. These birds are also referred to as “leapfrog migrants,” because individuals from the northern breeding populations winter farther south than individuals from southern breeding populations. They winter throughout Mexico and Central America, including the Osa Peninsula in Costa Rica.

On your next hike in a field, prairie or wetland (including Belwin’s Stagecoach Prairies Natural Area and the Bison Prairie), be on the lookout for this cruising, graceful bird. Allow yourself to just stop and watch. You’ll be amazed by their fluid flight!

Taking the time to look and listen can bring us the peace, grace and beauty that the natural world offers. Happy hiking!

Members: Join Lynette Anderson on the third Tuesday of each month for a Sunset Prairies Hike at Stagecoach Prairies. Park in the lot off 11th Street South. Our next hike is September 12 from 6:00 p.m. to 7:30 p.m.